Godzilla vs. Kong Delivers on Spectacle, Not Much Else 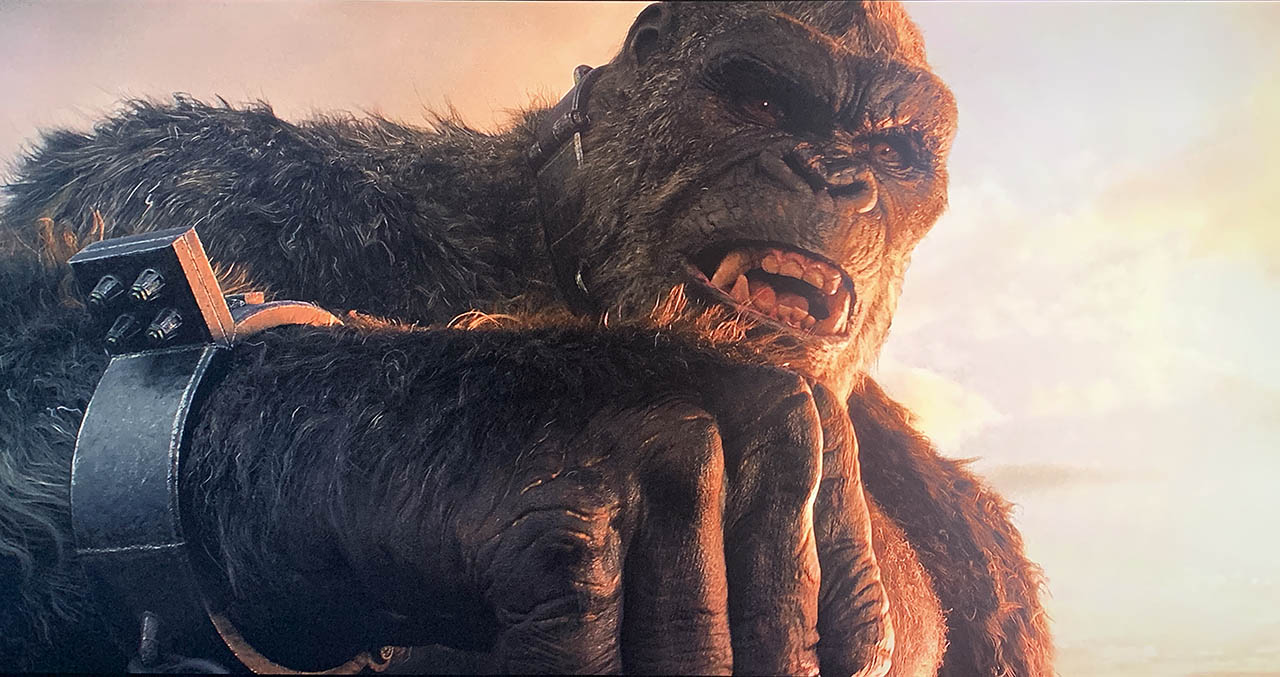 Mind-Blowing Action and a Dumbed-Down Plot: Godzilla vs. Kong Delivers on Spectacle, Not Much Else

Not every film needs to be a cinematic masterpiece. Sometimes, all movie-goers want is a chance to shut off their brains and watch some stuff blow up. If that’s the sort of popcorn flick you’re in the mood for, Godzilla vs. Kong is the movie for you.

Set within the MonsterVerse movie universe, Godzilla vs. Kong improves upon previous entries to the franchise while at the same time falling victim to many of the same mistakes that held those movies back.

Too Many Humans, Not Enough Monsters

On its surface, the premise of the film appears straightforward: Godzilla has gone rogue and humanity needs King Kong to stop him. Unfortunately, what could have been simple is made into an overstuffed mess of awkward performances, unnecessary exposition and boring plotlines, all of which serve to water down the film with the misplaced goal of giving audiences characters they can empathize with. Instead of adding all of these uninteresting characters, the filmmakers should have been focusing on making the titular titans more empathic and relatable. In an era when CGI characters appear to have fully crossed the uncanny valley, this is far from an unreasonable ask.

This is the same, tried mistake that movies set within the MonsterVerse continue to make – devoting hours of character development to persons no one cares about, when that time could have been spent further connecting the audiences with the monsters themselves. The movie’s director, Alex Wingard, even admitted in a recent interview that this is the sort of direction he hopes MonsterVerse movies head in, should there be additional installments to the franchise.

“That’s a big breakthrough VFX-wise and even story-wise. If there’s another MonsterVerse movie, in my opinion, it should be the first full-on monster film. I would say, 30 percent humans, the rest monsters, basically flipping the formula of what a lot of these movies generally are. I think people are ready for it,” Wingard said, according to Entertainment Weekly.

Kong is the Star

Godzilla vs. Kong does head ever so slightly in this sort of direction, however. When it comes to the titular kaijus, Kong is actually given a bit of development. This is done through the giant ape’s relationship with a young, deaf child named Jai. Apart from the epic battle scenes, these moments stand out as the most compelling parts of the film, showing a subtle vulnerability behind Kong’s hulking exterior; humanizing him in new and interesting ways which stands apart from previous interpretations. Unfortunately, these moments are few and far between, with much more screen time being given to the humans following Kong.

Led by Alexander Skarsgård, who gives an incredibly forgettable performance as Dr. Nathan Lind, the characters involving Kong are more engaging than their counterparts following Godzilla (although that isn’t saying much). Also along for the ride are Rebecca Hall as Dr. Illene Andrews, an anthropologist studying Kong who serves as Jai’s surrogate mother and Eiza González as Maia Simmons, a shady executive from Apex Cybernetics with a hidden agenda. While Hall’s performance is at least somewhat compelling, Simmons, between her poorly delivered lines and awkward campiness, is anything but.

Their journey culminates in an adventure into “Hollow Earth,” the mysterious realm where all titans came from that exists within the Earth’s core. Apart from the battle scenes, the portion of the film set in Hollow Earth is the most visually awe-inspiring. A true highlight. Additionally, the journey into Hollow Earth serves as perhaps the only time when the human element of the film actually feels necessary to move the plot forward; exposition involving the origins of Kong and Godzilla, while sparse, is incredibly compelling. Hopefully, this fun bit of world-building is a thread the filmmakers continue to pull on when future installments to the franchise are made.

Godzilla Gets the Shaft

That was the better of the two plotlines. When it comes to Godzilla’s half of the film, things begin to get much less interesting from what was already forgettable. While Godzilla’s attacks on human cities are magnificent to behold (especially on the big screen), the supposed grand conspiracy involving what is provoking said attacks is dull and uninteresting. Whenever the film chooses to focus on the characters investigating this conspiracy, audiences are left tapping their toes, waiting for the plot to return to the kaijus.

Between the two title characters, at least Kong had some development. When it comes to the King of Monsters, there is a complete lack thereof. Any time that could have been set aside to develop a character-arc for Godzilla is instead granted to a boring plot involving, yet again, boring human characters – as has been the case with every Godzilla film in the MonsterVerse. These characters include a crazed conspiracy theorist/podcast host played by Brian Tyree, Henry who hams it up to a cringeworthy degree in the role, and two teenagers, one of whom being returning character Madison Russell played by Millie Bobbie Brown. While Brown’s performance is likely the best of the film, it is completely unnecessary. If her character had been wholly removed from the film, the plot would have remained virtually the same.

All is Forgiven Once the Battle Begins

For all of the movie’s faults, and there are many, it delivers on its biggest promise: providing fans with the epic one-on-one they’ve been waiting decades for. Kong and Godzilla face off three times in the movie – or for three rounds, if you will (the movie even makes this tongue-in-cheek boxing analogy).

Among the movie’s action scenes there are many unforgettable standouts. The two most prominent of these being the ocean fight scene between Kong and Godzilla on the battleships (heavily featured in the movie’s promotional campaign) and the final, climactic battle, which brings with it an unexpected twist.

Not only are these scenes epic in scope and electrifying to watch, they also manage to be inventive, which is the trademark of any great action scene. Rather than just showing the two kaiju punch each other for ten minutes (which the film certainly could have gotten away with), Godzilla vs. Kong’s creators took the time to come up with something much more compelling in both cases. Kong and Godzilla’s unique skills and abilities are highlighted in various ways. The environment becomes a big part of each battle as well, which greatly adds to the scope and the thrill.

Overall, this is a film you’re not going to want to miss on the big screen. If the idea of a Godzilla vs. Kong movie excites you, don’t let the bad story and poor performances chase you away. There’s a lot to love here, especially if you’re just looking to sit back, relax and enjoy the experience.