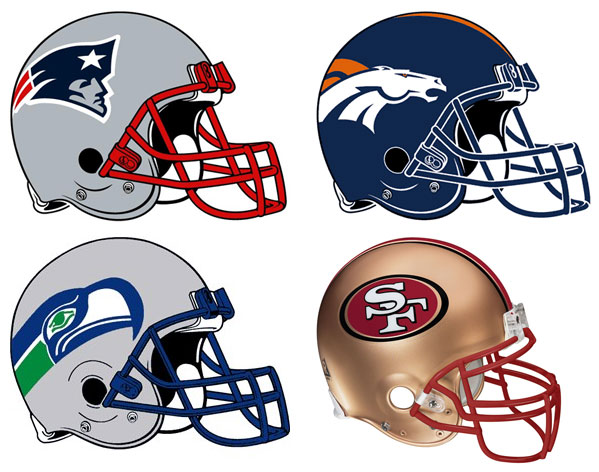 The NFL released the schedule for the 2013/2014 AFC and NFC Conference Champion playoff games immediately following the divisional playoff between the Broncos and the Chargers yesterday. And, the networks could not have planned better matchups for next Sunday. Starting at 3 p.m. Eastern, the Denver Broncos will host the New England Patriots at Sports Authority Field at Mile High. At 6:30 p.m. Eastern, the San Francisco 49ers head to Century Link field to play the Seattle Seahawks, where the noise from the crowds on Saturday’s game reached seismic measurements.

In the AFC, media outlets want to call the Conference Championship game Brady vs. Manning. But if you look at stats from New England’s last game, it was LeGarrette Blount who carried 166 yards and 4 touchdowns. Brady didn’t throw one touchdown pass. When Peyton Manning was asked about the QB matchup, his reply was “it’s the Broncos against the Patriots.”

In the NFC the two most dominant teams in the West, the Seahawks and 49ers, will meet for what should be a Super Bowl in itself. Many analysts are saying the 49ers are peaking at the right time and poised to take home the Super Bowl trophy this year. But the Seahawks, who have been hot all season with 13 wins (only matched by Denver in the AFC), are also on the hunt for the Lombardi Trophy.

It’s another great weekend for pro football. Check the schedule below and set your calendar.